I'm doing some minor mods to my VR Berlina, currently replacing the chrome strip around the bumpers and doors.
I've had one side off for a while with the black tape/glue still on it because I didn't have a "caramel wheel" until now but I had tried my best to get it off as much I could.
I just tried to take it off but it's really adamant not to come unless I keep it on it for a very long time, which has annoyingly started to strip back the clear coat.
I noticed that there were 2 different types of tape holding them on, a more foamy type then this solid thin strip under it. How do you get it off?
I took off part of the other side to see if it was my method and the foam-type came off a breeze but not the other one, am I just doing it wrong or has some muppet used a different type of glue? 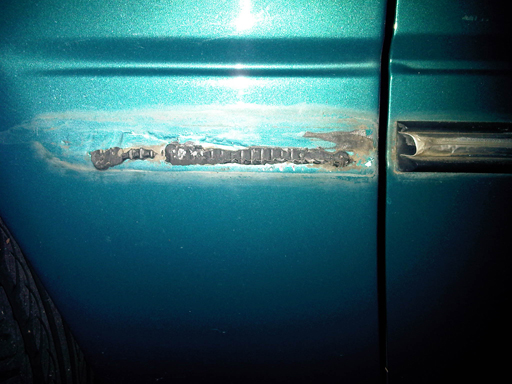 I'm fairly sure this belongs in the general as it's more of a paint thing and not VR-VS specific.

Sorry dude but some fcker has polyurethaned that strip on. It's going to be near impossible without damaging the paint. If it's the good stuff like Sika 255, the paint is already 'damaged'.

Do you just need to get it low enough to put the strip on?
Whoa... Black Betty
K

Hahaha I want to give whoever put it on a big kiss. Pretty much just needs to go low enough because as you can see on the trip still on the car, it's peeling and seems to be worn down on the ends?
Also on the front fenders whoever replaced them (the car was handed down and had been in a front end collision and I found out that the replacement parts were rather poorly painted over. you can see it bubbling where the foam-type was and under that is pristine metallic red, lazy shits didn't even take off the previous clear. It's the same on the rad support. Should I just keep using the caramel wheel?
S

Location
in a shed