Hmmm might try and call a diff shop and have a chat, see if they've seen this symptom before..
Current Project: VH SLX EFI 5L​

Probably just a junk part..lot of that crap going around & with little availibility no farks given by suppliers once you've paid for parts.
A

Leigh_G said:
Aloha JC fam, I'm in need of some advice before I lose my mind!

Long story short I've done a disc brake conversion on my VH (VL diff) and she's chewed through 3, maybe 4 rear axle bearings almost instantly and it's driving me nuts!
Need some help identifying what's causing this issue and I'm sure someone here will know.

Here's the run-down:
- I bought and installed a low km (100k) drum-brake, 25-spline VL diff (Borg Warner)
- Drove around with the drums for a while, everything was great.

Disc conversion:
- Backing plates and calipers taken from a VR/VS ute
- Bought new disc brake bearings for VL (with the different oil seal to the drum ones)
- Pulled drums off, axles out and had the new bearings pressed onto the axles by local Ultra Tune
- I installed the axles with fresh bearings, new backing plates, new rotors etc

Drove it round the local streets for a day or two and I then heard what sounded like disc rotor rubbing on something - up on jacks, found one axle had too much end float and the rotor was touching the caliper and not the pad anymore - essentially the rotor was no longer 'central' to the caliper

THE ISSUE:
Pulled it all apart and found that the bearing cone's outer "rib ring" had sheared/broken off, allowing some axle movement. (The rib ring is the outer edge of the cone you can see that 'sticks out' from the bearing cup when viewed side-on out of the car)

Shortly after, the other side did the same thing. Sent axles off to my mechanic to do it all again with new bearings, installed them and at least one of them has done it again.. Exact same symptom.. This one didn't even last a 2km test drive around the block...
You can see below, the ring has ridden up the rollers a few mm - this is the furthest I've seen it happen.. 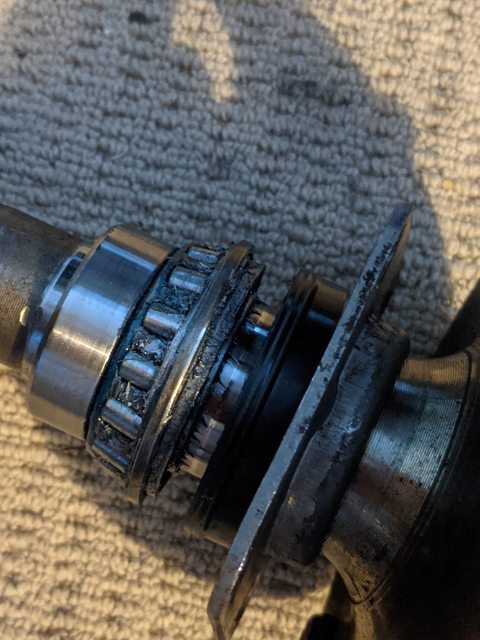 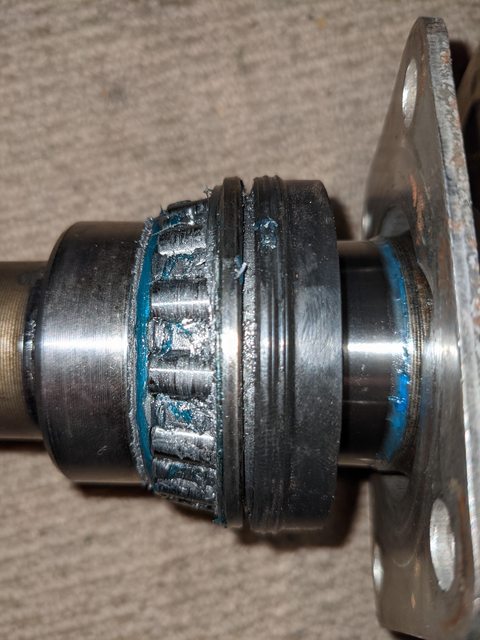 Whats with packing bearings with grease ???

Providing bearings were pressed on properly as you mention later ....Looks like the bearing cones were not installed correctly into diff tube and when axle and 4 bolts tightened up it didnt seat correctly on cone. This occurrence can be felt sometimes when torquing up bolts as it hard to tighten all 4 bolts evenly.
Can also occur if all 4 bolts are done up incorrectly, allowing the axle to walk and put bearing in slightly wrong facing on cone and the rotation force of drive wheel was pushing axle back into diff and hence pushing and squashing bearing up.
Adding to the possible only one side failure might be the panrod bar slightly out of whack/measurement from the diff changeover .