Hi all as the title says is there a LEGAL way to add wheel spaces?

I have some 6-4 pot brembo’s to fit on my 15 SSV but unfortunately the standard wheels touch the back of the spokes to the face of the caliper.

I have picked a new set of wheels that I want but if there is any legal way to alter the factory wheels off set I would like to do that as I really like the way the standard wheels look.

I know you can change the barrel size on certain wheels but can you change the off set of your wheels?

I am pretty sure all spacers are not legal for road use in Australia.
B

Members Ride
More cars than I've got space to park!

From the National Code Of Practice (NCOP) for Light Vehicle Modification: 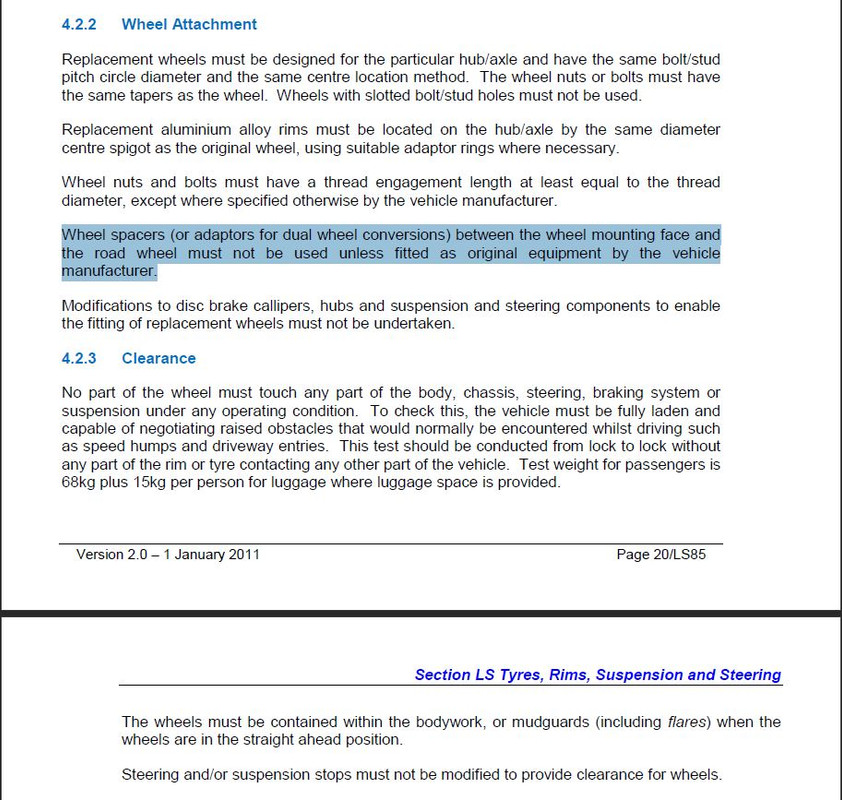 There are also rules regarding the tyre and wheel sizes:

And how much you can change the factory wheel track measurement:

Do you own a Holden or HSV with a Gen IV (LS2 / L76 / L98 / L77 / LS3 / LSA / LS7 / LS9) V8 engine? Then we need your help!
We're creating a list of engine number prefixes to identify replacement and conversion Gen IV GM engines, please visit the list here:
http://forums.justcommodores.com.au/threads/holden-and-hsv-gen-iv-engine-number-prefixes.250144/
And verify the prefix on your engine number is listed, if you can confirm, contribute or correct please post a comment in the thread.
​

About as illegal as fitting 10”+ wide rims or any rims with less than 36mm offset, or 20” or higher rims, airbags or sssl springs or possibly the 6-4 Brembos on your variant (not sure, there is a 50+ page thread on it).
See the thing is none of the above is allowed without approval. An engineer may certify it, I don’t know. Plenty of factory cars run TüV approved / engineered spacers, there seems a case to have fitting certified.
But like guidelines and codes of practice and exemptions for suitably modified mags or brakes, or springs or tyres, have to seek approval is bottom line.
G8 GXP were US$40k in 2009. A decade later $48k second hand.
My VE SS is a keeper

Mattricho said:
I know you can change the barrel size on certain wheels but can you change the off set of your wheels?
Click to expand...

If they are 2 or 3 piece rims you can speak to the manufacturer and have the centres changed to address the offset.

If they are a 1 piece rim then a spacer is required.

If you go down that route make sure they are Hub Centric otherwise you'll seriously regret it.

And as per Bigfella237 earlier post, they are illegal unless they're an OEM fit.

Most Countries allow them but not Australia.

.
I've reposted the photos that were lost due to the recent Photobucket extortion tactics.

Doesn’t matter who says it, all above brake and suspension mods are illegal unless approved. Most non-stock big wheels, big brake, or lowered look cars are illegal too.
The notion that one modification is more illegal than others is covered within the certification framework. As above, you can speak to an engineer for putting a jet turbine in the back or twin turbo stroker too.
Look at modified off road rims and tyres being driven daily with spacers without certification, literally tens of thousands.
Look at modified lowered suspension being driven below the legal height limit, literally tens of thousands.
Point is not that because is not policed you can do it, rather highlighting that one illegal thing is not more illegal than another. You may be defected / fined / ordered to rectify all, equally.
Google found this, takes a trained eye / zealot to get wound up over that. 3mm spacer isnt going to be a massive issue

but longterm better without

but longterm better without

Exactly no worse than wider wheels without RE speccing the offset. Like everybody does.
Not as much overal. wear as say lowering to sssl or large wheel dia.
Should replace wheel bearings with every second rotor swap, cheap anyway.
G8 GXP were US$40k in 2009. A decade later $48k second hand.
My VE SS is a keeper
F

A spacer that is made correctly & fitted correctly really isn’t a problem in & of itself. Just like an OEM wheel, the weight of the car & all forces are spread across the entire contact-surface of both sides of the spacer, tightening the wheel-nuts just pulls the wheel+spacer into the hub so that friction can do it’s magic.
The only reason spacers aren’t carte blanche legal is because it’s too easy to make a spacer that ISN’T correct and which results in, for example, the weight of the car sitting on the studs.

If dead keen on getting spacers, I would talk to a certifying engineer, although there’s so much paperwork involved it’s going to cost you a grand in just getting them certified (assuming they can be certified - an engineer will know).

The need for spacers to fit a particular wheel does raise red flags for me though; you want to make sure that the new wheel with the spacer attached results in the middle of the new tyre’s contact-patch being where the middle of the original tyre’s contact-patch used to be, otherwise you’re stuffing the suspension geometry & getting poorer handling/grip/performance/braking & tyre wear.