Lifting Points on 3.8L Ecotec (How to Lift Engine Out)

Tested on 1996 Holden VS Commodore Executive 2

Seeing as the Ecotec doesn't have lift points - or at least the VS doesn't - I am writing a semi "how to" specifically about where to lift from and a few little tricks.​
What you'll need:
- Engine Crane (Load @ Max Extension: 500kg)
- 2x Round Lifting Slings aka Soft Straps (I used a 1000kg and 1500kg, obviously overkill, but its all I had)
- 19mm 1/2" Drive Socket (Preferable 6-point)
- 2 inch 1/2" Drive extension
- Decent Length 1/2" Breaker Bar (or big ratchet)
- 10mm Socket and ratched
- Somewhere to rest engine after: Engine Stand / Empty Tire

IMPORTANT; leave your engine mount bolts IN until you are literally about to lift engine out of bay. It's not necessary, but safety first kids!
I had the car up on engine stands because it made it FAR easier to get under there and unplug/unbolt things I had missed when I prep'd the car for this job. It is "easier" to remove the engine without the stands BUT if you've forgotten to unbolt anything you'll feel like kerb-stomping yourself.

Alright! So I am assuming you've removed all the components and bolts you need to, other than engine mounts and knock-sensor plugs. Your engine is still attached to Trans, even though bellhouse bolts ARE removed, the trans is NOT resting on its brace under the car yet.

- Have Car Stand just behind front wheel well both sides.
- Both Rear wheels chocked infront and behind wheels.
- Use your THIRD Car stand underneath the gearbox sump with your Thin Wooden Plank as a cushion so you don't damage sump. Make sure to center it well, because you will need to jack the Box up again later from the sump most likely. This is so when the engine gets pulled away the trans doesn't just fall onto it's brace. Not that I personally think it would matter, I ALWAYS take little precautions like this just incase.
- Set your crane to longest extension (LOAD NOT TO BE LOWER THAN 500KG: Even though it's a small engine, why take the ####ing risk? Don't be an idiot when it comes to these kinds of things)
- Pass one Soft Strap underneath your Plenum Chamber, through all of the intake pipes and out at the rear. Make sure that the strap is on the IN-side of the fuel rail, not outside, because lifting will crush it.
- Pass second Soft Strap through the end loops of the first Straps TWICE. I drew a little picture and took some photo's if my description wasn't clear enough. 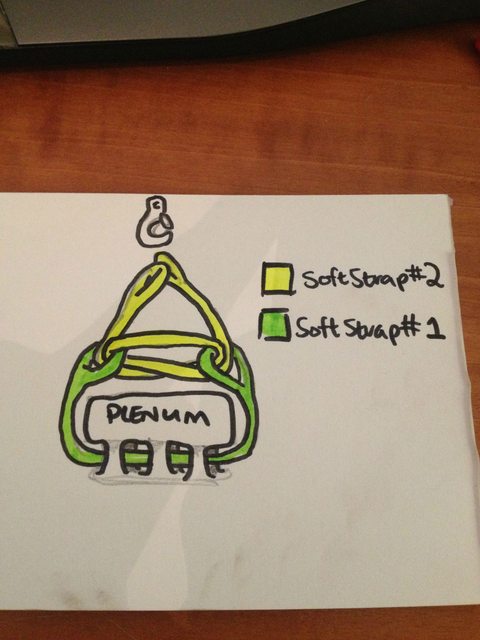 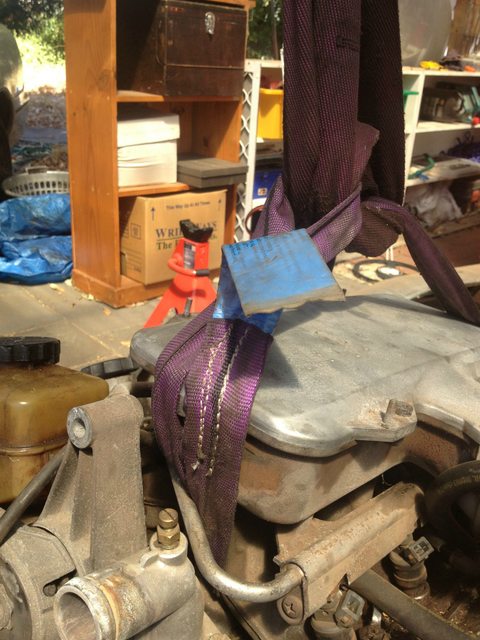 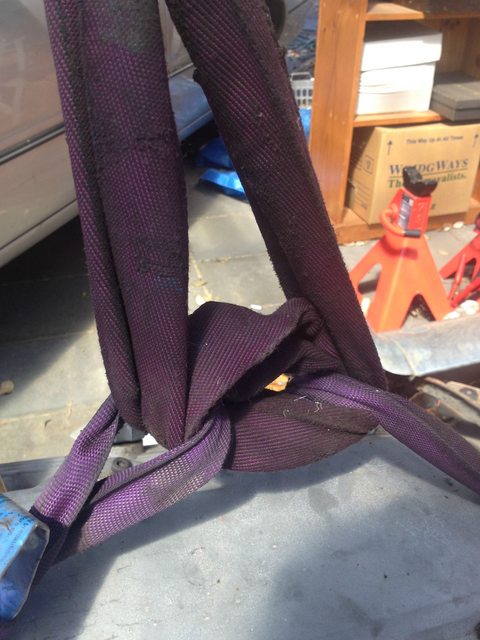 As well as NOT crushing the Fuel Rail you really need to babysit the soft strap on the rear side, because if it just sits square in the middle, the engine will tilt and bend/break surrounding components. The way I have the strap in the next image was what worked for me, but you may need to fiddle around a bit to find what works for you. More or less just get the center of gravity right. 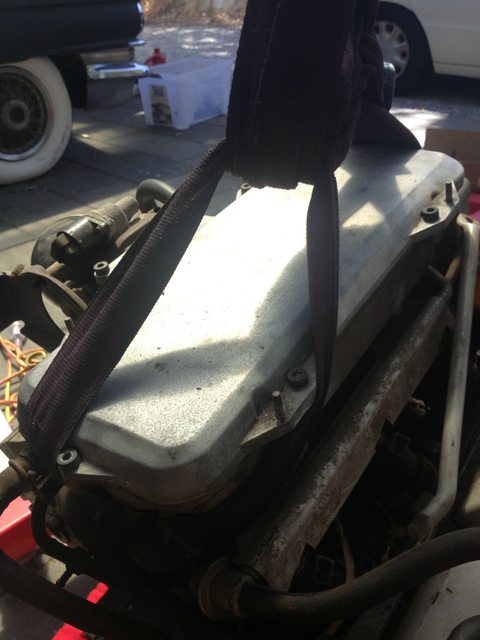 - Alrighty, get the Second Soft Strap hooked on to the cranes locking hook.
- Start Pumping up the Crane and watch the Soft Straps tensioning. The second strap will take a fair few pumps to become fully tight (because of the double loop).
- Keep pumping until the engine starts to lift a little. Stop.
- Stop.
- Use 19mm to remove Engine Mount Bolts
- Use 10mm to remove Knock-Sensor shield
- Use Thumb and Forefinger to undo Knock-Sensor Plug
(I didnt know it was a plug, so I just cut the wire on the car side cause it was a wrecked car the engine was coming out of. Wish I'd known though)
- Pump crane until engine peels away from trans up to 1cm.
- Gently wriggle engine left and right and pull away from trans.
(I was a little rough at this bit, did no damage)
- Engine "SHOULD" just pop out and be floating. But this is automotive, so nothing f***ing works how it should. Man up, find a way!
- Pump up more, and keep checking that nothing is getting caught or stuck.
- Once engine is a few inches from being clear of the engine bay, stop.
- Use Car Jack on trans @ the bit of wood on the sump.
- Remove car stand that was holding trans up.
- VERY gently let down trans so that it rests on its brace.
- Use Car Jack to remove left and right car stands.
(I used a central part of the subframe to jack from, because I have a big-ass hydraulic jack. Don't be lazy if you have a small jack, do it safe, one side at a time.
- Once both sides of car are down, the engine should have enough clearance to pass over front of engine bay.
- Roll engine where you want it and VERY slowly let it down. 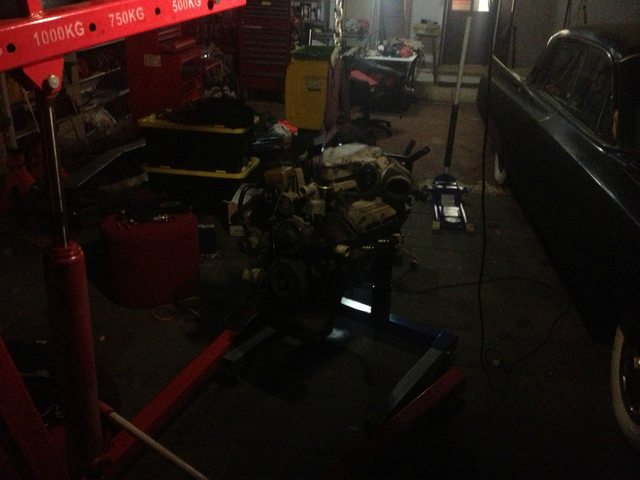 I probably wouldn't use just the plenum and intake manifold it's only alloy and brakes very very easy, there's only like 8 m8 bolts holding him onto to the valley good write up though fella, I like your diagram! Whenever I do ecotecs I usually put 1 strap around plenum, 1 around alternator (got the big ass bolt through at bottom and the 12mm rod brace) and another through the extractors/headers and triangulate the load, works well and I usually use ratchet straps load rated at 300kg each so you can tighten individually to move say front right up or back left etc etc
C

I just completed a ecotec removal and l67 install and I used 2 holes that i inserted bolts into (M8 I think). These bolts holes are inline with where the exhaust studs screw in and are located at the front of the block on the drivers side and the rear of the block on the passenger side. I just used some cut up seat belts as straps to connect to the crane.

The intake manifold inst designed to support the 300 odd kg of the engine. While it may have worked fine for you this isn't a good idea...
http://forums.justcommodores.com.au/vy-vz-wk-wl-v2/216717-paradoxs-vz-ls1-calais.html

cruelass said:
I just completed a ecotec removal and l67 install and I used 2 holes that i inserted bolts into (M8 I think). These bolts holes are inline with where the exhaust studs screw in and are located at the front of the block on the drivers side and the rear of the block on the passenger side. I just used some cut up seat belts as straps to connect to the crane.
Click to expand...

I use a pair of old HK Seat belts complete with the adjusters and place underneath the sump at the rear and one under the front of the sump. I then use a 4 inch long bolt and slide all the seat belt mountings points over the bolt and then use the bolt as the lift point. I would always completely sling the complete engine from the bottom upwards. It's the only way to do it safely. Anyone using 8mm bolts and also alloy gear to take the weight is taking their life into their own hands and pissing it against the wind. Unbelievable what some of you guys try and get away with.
B

The sump is alloy

Just gotta remember to make sure the high pressure power steering hose is undone, it's hard to pull the engine out with it still connected. Don't ask me how I know....
My HJ ute rebuild!​
My VS Statesman​
C

I think with Ecotecs and l67's they arent too heavy so with the tranny still connected it would be around 300kg. but the issue with using the intake or sump would be shifting them around as they arent bolted very tight to start with so with the intake you could cause a leak and not know why its running badly.
You must log in or register to reply here.
Share:
Facebook Twitter Reddit Pinterest Tumblr WhatsApp Email Link
Top