I have a Sports Wagon VF SV6 LPG 2013, and my vapour converter is now dead; I took it to Holden and to one more place in Carrum Downs in VIC, and both told me that this part is nowhere in Australia, on Back Order with Holden, ETA is 6-8 weeks... It kills me, I need to work..

The converter is NIKKI, Japan, but I can't see the exact model or any other details. 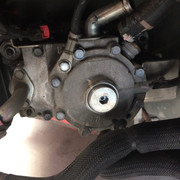 Any ideas, where can I get one, please?

Thank you a lot!
S

Wow, 6 to 8 weeks back parts order... hasn’t Holden heard of delivery times from the likes of amazon, eBay and others. Those mobs are are able to source a part from anywhere in the world and generally get it to your door in less than a week heck those mobs can probably get parts delivered from Wuhan province quicker than a local dealer can deliver a part from down the street

But putting Holden’s incompetence aside, isn’t there an option to find the Jap or another supplier yourself and order a new part directly from them, or better still get a service kit as these these things generally only need new seals and diagram to make them new again

However, you may need to remove the converter to check all over for some parts numbers which are hopefully cast on the main body. Otherwise a cheap arthroscope from eBay may allow you to have a good look for those numbers. Then google may help you find the correct replacement converter of repair kit (just note these links to Century Fuels (USA business) are not the correct parts but they may have them so you could ask them)....

Anyway, below is a video of how to check and repair issues with an lpg gas injection system, something that is illegal for the ‘unlicensed’ if you touch the high pressure sides of the hardware, but it’s informative. I’d think the Nikki system is probably using same principles as OMVL system described


And I’m assuming you’re car is dedicated LPG, in which case it’s not drivable until repaired, otherwise you’d just flick the switch to petrol and get LPG repaired in a more leisurely and less stressful timeframe
Not having a dipstick is perfectly fine when the guy doing the trans service isnt a dipstick himself - Milo 6.0 (26 May 2020)
S

another lpg converter video but this time you see full disassembly which highlights the crap that tends to accumulate past the filter...
You sure your converter is dead or simple needs some TLC (maintenance)...
Not having a dipstick is perfectly fine when the guy doing the trans service isnt a dipstick himself - Milo 6.0 (26 May 2020)

Go to a lpg installer you probably can just switch the converter out with a different one, no need to get the same brand, good luck, PS I had mine done for 400 in my car and it was different to original a few minor adjustments and way you go.

Give this guy a ring he is awesome.