I was wondering if these chambers were standard or ported? We have quite a few heads like that they're either blue or black heads. Also in pic 11 can anyone tell me what normally goes in the large hole left of the inlet ports is it the temp sensor thing?
Last edited: Jun 29, 2008

I haven't seen what a stock blue/black motor heads looks like but they don't look like a factory as cast head. The look like they have been cleaned up with a machine rather than by hand? maybe they are a yella terra head?, just a guess but if you have more than one head the same as that it makes sense

Thanks greenfoam i was thinking they might be yt heads there's about 4 that they're using there's one i can keep its got valve seat inserts in it and looks in pretty good condition except for the hole i pointed out in pic 11 is larger than it should be. I thinking of blocking it up. I looked at mine and it runs to the egr valve and carby. The other hole just further along is blocked off so i was just going to swap them around.

the chambers look like theyve been polished for some reason but the ports appear untouched, yella terra have lots of material removed in the port area
the holes are for the vacuum switches etc, its a VK carby head as its got the egr pipe fittings above the exhaust ports
ill take a pic of a yt port so you can see the difference

here is a yt efi head, note screw in rocker studs & guide plates
no holes into the exhaust ports, machining can be seen in the inlet ports, exhaust ports are too dirty to see much
picked up this head with rollers & all for $50 at a swap meet.lol

the chambers of those heads look like they have been enlarged ... i've never seen a stock blue/black head with a chamber that shape ... but its hard to say too much more as the pics are too small!

Rob - nice score for $50 .... one thing that looks different on that head compared to mine is the height of the screw in studs, it looks like the pedistals haven't been machined down, just been taped out to suit the 3/8 studs.

heres a pic of the chambers on my blue 202 head, its not a YT head, its been worked though .... note the chamber is totally different shape ... yours may be changed to lower compression!

this isn't the best picture, but you can see the pedistals are machined down further than yours Rob.

not that it really matters, but you may not be able to fit certain rockers with them that high.

i know you wouldn't be able to use V6 rockers on it, which is what i have fitted to my head now as im not able to get holden 6 parts anymore (other than roller rockers)
Sammy.
http://www.oldholdens.com/

Yeah sorry about the pics i took them on my phone. One thing i was thinking is there any difference in 2.85 heads ? I thoguht mabye they'd been inlarged to bring it closer to 202 spec. Though i assumed the difference was just bore and stroke. another thing did 179/186 have screw in studs or are they permanent or did they not have them and just look like 202's

So a black efi head has no egr ports above exhaust i never noticed that are there any other differences or are they same as blue heads? Also sammy are v6 rockers better than 202's? which rockers do you use vn or vs onwards? is there any difference between them? i don't know as i don't assemble heads. what springs are the yours can you fit v6 ones aswell? or is better to buy new standard ones.

holy crap, too many questions

ok, firstly 2.85 heads no idea, never seen one .... but the size of the motor is differences in the block not the head .. its probably got different sized chambers and thats about it.

179/186 have the pressed in studs and they are adjustable, uses different rockers to 202.

the v6 rockers i have used are from series 2 vn/vp commodores, vn s1 are different as are VR onwards.

left is v6 rocker and pivot, right is holden 6 rocker, as you can see very similar dimensions, v6 rocker is thicker material though (stronger is good )

right is the rocker as it comes off the V6, left is the modified version. fairly simply you have to cut the base off the pivot so you can screw it up and down on the screw in studs.

to get the geometery right (rocker center line on the right angle to the valve tip only required cutting of the pivot base (as above) and changing the pushrod length.

here you can see the left hand pushrod is a 202 length, the one on the right is from a 308 holden, just happens to work out perfect length to use with the V6 rockers.

thats about all there is too it. the main reason i did this is because my head has been running for years with standard 202 rockers on the screw in studs, and it used yella terra pivots which does away with the normal 202 saddles, problem with these as i found out when swapping the head onto a new motor was that they are alloy and obviously from the 200,000km odd they'd already done alot of them were broken through the center of the stud hole. 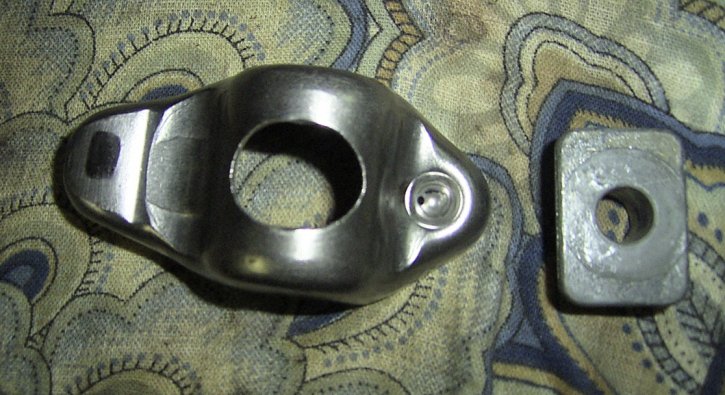 if you draw a horizontal line through the center of that bolt hole on that pivot thats where it broke.

yella terra no longer sells them and theres no other option that i could find to fit the 3/8 screw in studs and i wasn't keen to spend $400 on a set of roller rockers.

so $50 for a set of hardened 308 pushrods, a bit of grinding of the pivot bases and some time and she was all sorted. also the v6 pivot doesn't fit into the 202 rockers as the hole in the bottom is different shape and the pivot isn't a perfect fit inside it anyways.

oh and with the v6 rockers, they are 1.65 ratio where as the holden 6 rockers are 1.5 ratio, so thats a nice bonus to

now to the springs .... i have no idea what springs are in my head, dad setup the head before i got it, but i know from a mates head i compared the new springs he got to stock v6 springs and they are the same free height, coil thickness is the same and effectively it would mean you will get a stiffer spring on a holden 6 head if you used the v6 springs ... however i'd suggest you get a professional to ensure everything is ok before using them as they may be too stiff for your application and thats a waste of power!
Sammy.
http://www.oldholdens.com/

Thanks for the in-depth article sammy it answered all my questions perfectly.It obvious you put in a bit of work and it's not as simple as bolting them all on. top stuff and i see you put a bit more into that website since last a long time ago