To the haters of chevy badges

Dunno if this has been covered or not but
If you hate a chevy badge, what about this?
Personally I would have it done to my wagon if I had a spare 9k.

"The 24-year-old spent three months developing the Chevrolet Camaro-inspired front-end, which he has now fitted to his own car, a Holden SS Ute.

Advertisement: Story continues below The kit uses genuine General Motors parts, as the Camaro is based on the same underpinnings as Holden’s locally built Commodore range.

Though he’s only finished one vehicle so far, Bromidge says the kit will cost about $9000 for a drive in/drive out service, which will include the fitment and painting of the parts.

The kit can be fitted to all VE Commodores (2006-present), and Bromidge says that standing out from the Commodore crowd will be a big incentive for customers.

“I’ve had a few calls on the kits already,” he says. “Two guys that own SS VE Sportwagons have called me, and they’re interested in it.

"I haven’t even advertised the kit yet, but I’ve seen it on the internet in a few different places. I haven’t even marketed it under a business name yet!”
“The kits will go on any VE Commodore, be it wagon, sedan or ute,” he says.

“Most of the parts are factory GM parts – the bumper bar, the bonnet, the grille, the headlights everything like that,” says Bromidge. “We’ve just developed the guards and the mounting brackets.” 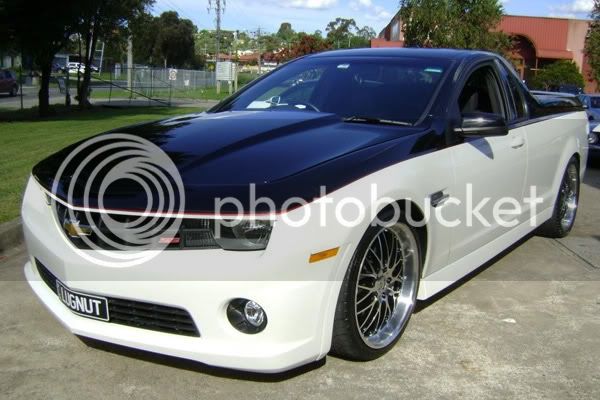 welcome to the machine

Polish all the things...

Do you know the company name behind it ? Or website ?
B

No website available unfortunately. They have quite a good range of tough U.S muscle cars as well.

This is as equally gay as turning your 6cyl VE into a HSV clone.

would like to see a sedan with this bodykit, reckon it would look great.

ima put a ve front on a camaro
F