Hi.
I've just swapped my ls1 motor into another ss body that was auto .. I've taken the engine loom to fit the ecu an bcm. Would I need to change the other side of the wiring ? I ask this as I have no fuel pressure, the fuses are okay an relay . Please help
V

DavidPartay said:
Ok, we did the wiring harness last night, and I got the correct dust cover for the transmission from Holden. It was $15.85 with two new bolts. Installing that was a pain, so if you do the conversion make sure you already have the correct dust cover to save yourself an hour - 90 minutes of unnecessary work

The speed sensor was the easiest to wire up. I had managed to find a male molex - (close-ended pins) to a small female socket used for internal computer speakers. All we had to do was widen the molex end connectors to fit in the plug for the speed sensor on the gearbox itself, and then the other ends (which were folded up) were a straight fit into the auto speed sensor plug. We taped it all up to hold it all in place and insulate it, and that was it.

The reversing lights were a bit more tedious as the plug on the gearbox is right near the top above the slave cylinder, and I didn't know if they were pins or sockets. They are pins - and we had to use female molex socket pins, and then crush them slightly to make them small enough to be a good fit. The hardest part was locating the pins in the gearbox connector as I couldn't see it, but eventually got it. I tried to take a photo with my phone (which helped clarify they were pins) but that didn't really help in locating them.

To connect the auto wiring harness to this socket, we used some electrical wire with about 1cm tinned - I don't know the gauge of the wire, but it was about 1.5mm after tinning it. These were a good, snug fit into the auto connector. It was quite difficult to plug anything into the 7 pin auto connector, but once it gets past the initial entry point it goes in easily and is a firm fit.

Then we taped it all up and tested the reverse lights - they were working. Obviously we had to take the car off stands to test the speedo but fortunately it's working fine!

Anyway, in the image I've attached you can see the correct wire colours and stuff. (Edited 21-06-20 as the image was not available) 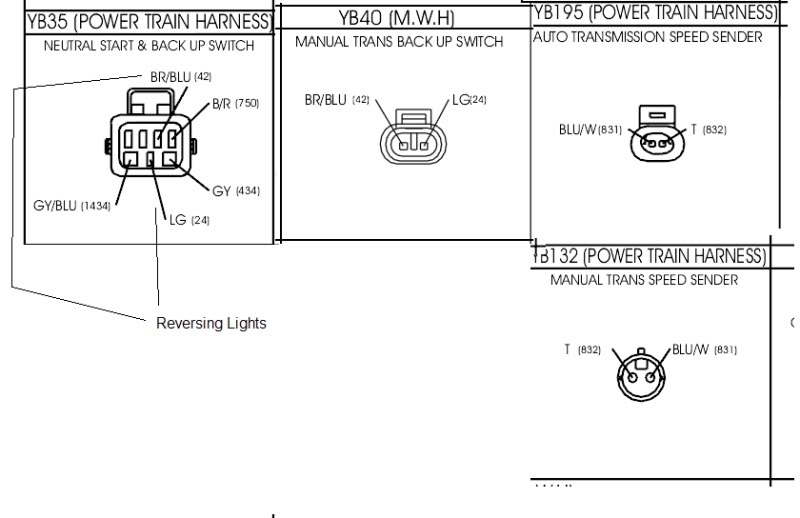