thought I'd clue up people on here on a relativley cheap and simple mod to change the look of the back end of your VE's cos I havnt seen it mentioned anywhere on here yet. The pontiac GXPs got a different lower section on the rear bars heres some pics of the difference

I just got myself one today and I'm going to fit it up next weekend due to it requireing a bit of modification to make it fit cos for some reason the mounting points are slightly different. they only cost around $60 from holden spare parts and the number is 92213320

heres a few more shots of some fitted to SS's

ah lucky bugger, yeah ours have the tabs in differnt spots for some weird reason

yeah saw this on the LS1 forum. looks pretty good and was gonna get it but then decided to do it when i can be bothered. Lol

Hmm interesting - thanks for sharing that redvess. I think I like it!

Let us know how you go with the installation. :thumbsup:

sick of the idiots here

yeah, do let us know how the install went (some pics would be great).
I like the look of this, but would like a heads up on the cut'n'shut to fit it

I don't know about anyone else, but I find the honeycomb on the SSV rear diffuser very hard to keep properly clean.
The G8 diffuser would eliminate that problem.
Plus it looks smoother and neater too.

his ones were just clips but I found mine were screw in clips so they were a bit harder to get out, had to pry them first then screw them out, must depend on the year model as to which you have

again mine were screw clips so it was a pain trying to get them out, then with all the clips out pry the tabs clear of the bar so you can pull the diffuser off

heres the difference between the 2 (my Pics)

so this is where you have to modify the GXP part, trial fit the diffuser with the 2 outside tabs inserted cos these are the only 2 that fit at this stage then score along the other tabs with the screw driver where they need to be cut then cut them with some side cutters making sure you dont cut too much better to cut too little than too much
so it should look something like this with the modified tabs 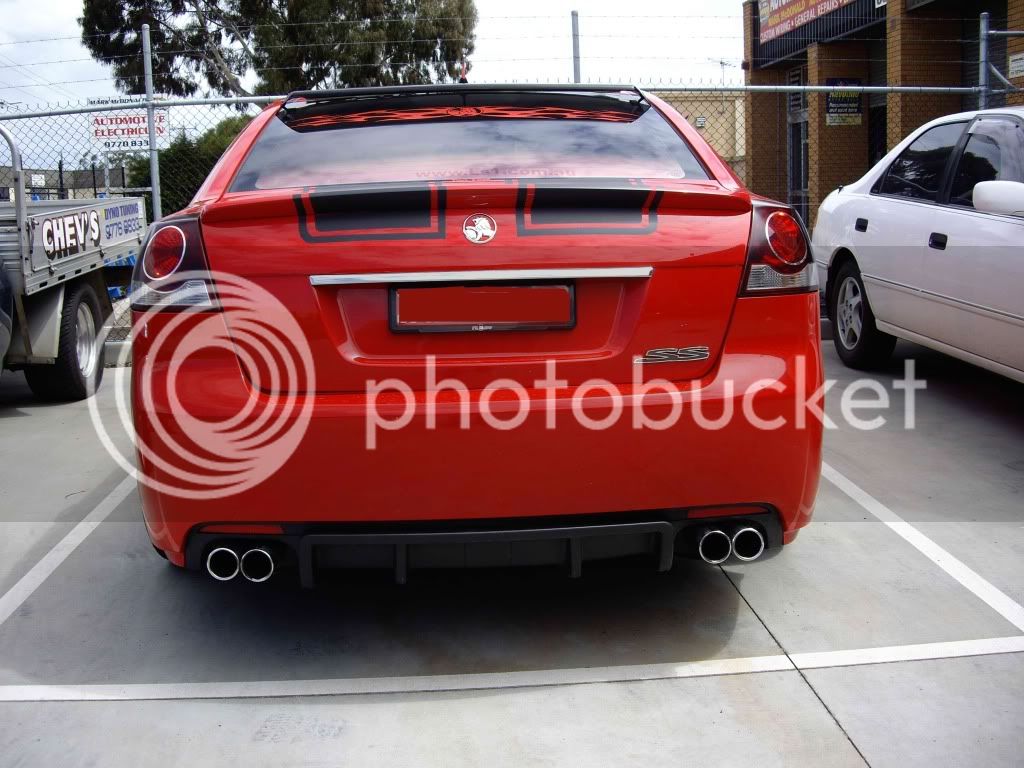 nice,
thanks for the write-up,
im going to try this now as you have outlined it!!
C

sick of the idiots here

thanks for the write up! :thumbsup:

Wow, I really do like the G8 diffuser better.

Thanks for that redvess. :thumbsup:

im trying to get a hold of one of these diffusers, im in brisbane and no holden parts have heard of them, also tried the number redvess gave and no respone??

These wouldn't fit the ute would it?? The Wagon is similiar to the ute but I have my doubts
SCENE6- 6 cylinder motor club. https://www.facebook.com/groups/442676629250115/
Mods, F Series Maloo
VCM OTR, Stealth Controller, Stainless Steel Full Exhaust 1"7/8 primary 4 into 1 headers, metal catalytic converters.
Big thanks to www.revhigh.com.au magnum perf
T

kuzman89 said:
These wouldn't fit the ute would it?? The Wagon is similiar to the ute but I have my doubts
Click to expand...

dont think they would, the ute has a different rear section to the sedans and wagons from what I can see

awesome guide,
i printed this out and did it this arvo,
thanks redvess

a bit off topic but can i ask if your spoiler is the g8 lip one that they sell @ holmart and also if so does it cover the original spoiler holes?
diffuser looks hot btw..

tomholzy said:
awesome guide,
i printed this out and did it this arvo,
thanks redvess
Click to expand...

no worrries glad I could help you out :beer chug:


KARTAL said:
a bit off topic but can i ask if your spoiler is the g8 lip one that they sell @ holmart and also if so does it cover the original spoiler holes?
diffuser looks hot btw..
Click to expand...

Got my diffuser today, should be on this afternoon.
2009 Liquid Red G8GT
4 door mafia
93 octane VMS ecm/tcm tune